Should Literature Ever Play A Role In Politics?

We all know that art (particularly literature) is an extremely powerful tool when it comes to politics and social tools or, rather, it has been in the past. Today, of course, it has hard to imagine anyone reacting with such emotion to any kind of creative work that it will really make a major change to their life in the long run; all the great literature which actively inspires change, it seems to me, seems to have been written already.

Of course, it’s extremely easy to say that; similarly, it is also a horrible notion to have; that everything worth being created, particularly in terms of political thought, or narrative to inspire real action or meaningful change. Still; I can’t believe that we reached the end of the road with political fiction or poetry – there is still such a huge potential for literature to change the world; and I firmly believe that.

Political Literature From The Past

There is absolutely no way we can move into the sphere of political writing without turning our heads to the widely-agreed master of political literature – George Orwell. Orwell is, perhaps, best known for his final novel, 1984 – a political novel of such force that it remains banned in many countries (we’re looking at you North Korea) – along with many of his other writings including Animal Farm.

He is also widely recognised for his opposition to fascism of any kind, as shown throughout his life when he went to join the Spanish Civil War, and later supported the war effort against Germany. His non-fictional writing, too, is often pointed at as a fantastic piece of political writing; just look at The Road To Wigan Pier!

For me, however, the Orwell novel which had the biggest effect on me and, to an extent, still has, has to be Keep the Aspidistra Flying. Gordon Comstock, for a long time, sat behind me eyes and spat out his hatred of money and the control it had over people; I felt the same delirious joy as he when I felt money in my pocket; I, too, would blow it as soon as I got it out of some loosely justified contempt for its worth. 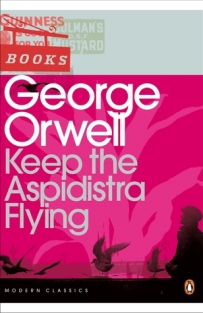 I, for all that I understand what a strange, foolish character Gordon Comstock is, couldn’t help but agree with him, sympathise with him; I wanted to understand him, and so I read Aspidistra a dozen times or more over the space of a few weeks. To be perfectly honest, there are very few books that have had such an effect on me; even 1984, for all that it was a fascinating piece of fiction, for all that it is one of my favourite narratives and settings, didn’t have the same effect on me that Aspidistra had.

When I came to read Swastika Night, I remember being nervous about reading it in the open; for all that, as anyone who had read it would know, it was a complete and utter takedown of Nazism, the version I own is covered in marching soldiers and swastika flags. I had to read it in the library once, at university, as I quickly hammered out a low quality essay on political fiction the day before it was due in. 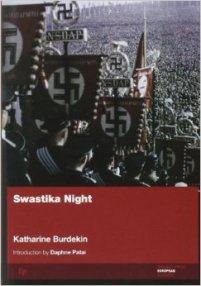 Still; the way it just tears down Nazism; the way it blatantly discusses the latent homosexuality of hating women, the way it presents a world under the mad, fervent Nazi occupation and the brutality of it all; the sickness with which they worship their Hitler who sprang fully grown from his father’s forehead – the blend of mad politics and religion is fascinating to read, and it is certainly one of the best books to ever emerge from the Left Book Club over the years.

Sketch of A Last Day

Whaaaaat? A fairly modern entry with something to say that genuinely relates to modern life in a direct way, rather than opposing already majorly defeated nationalist ideologies or things that will never be defeated in modern capitalism? 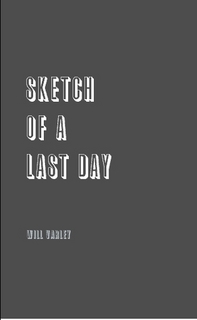 I reviewed Sketch a long time ago, or did a very minor review on it anyway; I still want to write something much longer on it and really sink my teeth into it. Anyway, it was written by a folk-singer/songwriter and you can definitely tell by the poetry behind a few phrases here and there; the air of defeat, still heavy with hope, is something that appeals to me, and the dystopian society that Varley creates is so similar to our own that it actually a perfectly believable, reasonable thing to believe in.

Written by Sándor Petőfi, Nemzeti Dal translates as the National Song, and is widely credited as being a major force behind the Hungarian Revolution of 1848, and was chanted by thousands of people as they marched throughout the city of Pest.

Now, I’m normally not a fan of nationalistic writing; I think, in the history of

politics, nationalism has done more harm than good, and it is certainly damaging in the modern world, but the immediate effect that this poetry had, the hope and the optimism contained within it, means that it deserves to be considered when it comes to the best pieces of political creative writing.

There are thousands of examples of political writing, from obvious metaphors like Animal Farm to novels like Cwmardy, but these are probably some of the most political narratives that have had a major effect on me over the past few years.

Should Politics And Art Ever Really Work Together?

Now, just because literature and politics have worked together in the past, doesn`t necessarily mean that everyone agrees with it. Personally, I don’t see the harm in politics being the motivation behind creation; it doesn’t seem any different to having any other kind of motivation behind art or literature. In the past, however, I’ve heard the argument (and played Devil’s Advocate with the argument whilst a few Guinness in) that it runs the risk of becoming a subversive creation, designed wholly to make the person believe what the artist believes.

In such circumstances, it is logical to assume that it would then become nothing more than a tool in the hands of political zealots. But then, what has 1984 been used as, if not a weapon in the hands of those who oppose totalitarian control and fascism?

It is all too easy to weaponise thought, particularly emotional thought, but maybe that is why political literature needs to exist; a weapon in the war of the minds. Maybe, for every rifle, every IED, there needs to be a morally superior weapon made from pressed paper and black ink. Or maybe that’s a stupid, romantic idea that doesn’t mean anything when compared to the harsh realities of the world.

Any kind of creative work undertaken in public tends to be imagined as political; this isn’t just confined to literature, but every form of creation. Buskers tend to be seen as liberals or socialists, no doubt relating to the communist witch hunt which took place in America, targeted towards people like Pete Seeger. Poets who recite in the street are automatically treated in the same manner.

Whatever its content, public art seems liberal and proletarian, making it immediately politicised, just because of the manner it is presented; alternatively, the stuffy atmospheres of galleries and museums have always seemed, to me, to be somewhat conservative and repressed – obviously aligning them more with a middle class ideology.

Personally, I tend to think of most art and creative works as being liberal in political leaning, which is why I find writers like Ayn Rand so interesting, simple because they lean in such an opposite direction from the beliefs that I, through some kind of societal absorption, have picked up throughout my life.

Anyway, what do you think? Do you believe that politics is as good a motivation as anything else when it comes to creative works? Do you like reading political works, or literature that is designed to change your opinions, or do you prefer to read for enjoyment, escapism or any other reason?