The Harrying Of The North?

This is a ‘poem’ that I’ve been working on for a while. I started it after walking into work one morning. (At least this one isn’t bus-bound poetry!)
Enjoy.

(this is a conscious decision) That my toes trace
uneven oceans of stone, and skip
by broken islands of dirty-dusty-rain water –
British, a land-locked Archipelago which dares to race
the passage of the earth. I allow them
to carry me across a broken circuit’s lip;
they depart from habit and follow
in the coal-stained footsteps of ghosts.

How often, I dare to wonder of myself,
have these cobblestones stolen the soles of my boots;
how have these same walls loomed over me
and rejoiced in an eternal victory over my failing health?
How long has it been, since industry spat from the mouths
of steam trains and chimneys?
Oh, I may as well shout ‘Jutes!’
and rattle the warning bells!

The ghosts trace the stone and I
dare to dare to taste their coal-dust blood –
Or I dream that I can.
Romance unmercifully lies
over this town like a shroud and moves
through the thoughts beneath a rapist’s hood,
in silent and subtle ways.

A loveless romance that curls about the larynx,
with no hesitation, smiles and tightens.
This place will render every man mute,
with every raindrop on the skin, so jarring,
that it shakes one from one’s thoughts;
like the piss or the punch of a Titan,
as though the two were equally as strong.

There is a sign; levitating, thanks to iron bolts,
against a tired stone wall that passes me by.
Don’t feed the Homeless, it reads in words
chained and broken and whipped like colts
until they twist through rings of fire and urinate
on their personal scriptures
as though they were the most heinous of lies
and language is a tool for my enemies.

And I follow these spectres through the Royal Arcade
and out, into grey-stone and greyer skin
and between the frowning forms
of carping women and their children, never made
aware of their lives. How incredible it is!
That they are born with all their organs within
the confines of their volcanic flesh. 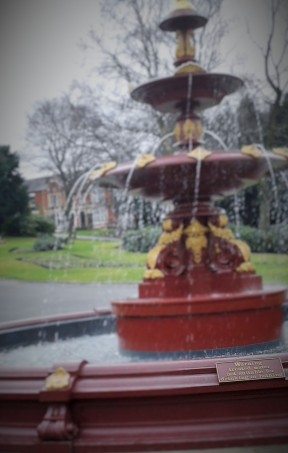 This town is a living, breathing, dying segregation;
a divide runs between the living and the dead,
and the dead so outnumber the living. Dead
make up the Vox Populi of the nation –
sound within which we are trapped, like poverty-stricken men
clutching with numb fingertips at our bread,
tearing it apart like I could hope to find a Hypothermic within.

In Makinson, Love Forever closed some time ago,
and the shadow-wreathed windowpane settles a melancholy
upon me, but never a visible misery, never an audible dismay.

I never crossed the threshold; though
I smiled, at priestesses and priests –
prophets whom subscribe to a folly –
That transactions and hymns are the same against the devil below!
And they will sow pockets onto their shrouds,
Or carry a wallet with them, at the least!

As the Grand Mecca shimmers and shits across the marble ground
and I see the hordes move there to pray
with their credit cards and debit cards and change.
I see them go to worship on that holy site found
by the desperate, convincing themselves
that they haven’t yet lost their way –
they go to subscribe and to live,
and I, poisoned, go to mourn the dead
and to piss.

And, later, King Street vomits out its princes and princesses –
they boast of switch-blade Excaliburs and homemade Love potions,
chaste and hidden in handbags; to be mixed with soda later.
Why should they have to pay for love, in their fine dresses
which tumble down to their thighs and no further
and can only work to rise at their each and every motion?

But all the lovers are now Saxons, and all the Saxons are Dragons,
and all the Dragons are dead – buried to their necks in hard-earned gold.
Lancelot and Guinevere dance to provoke Arthur’s anger,
Gawain and Bors are drinking from half-pint flagons
and watching the revelry and rage with all the glee of gossips –
and the last embers of that which had been Tristan and Isolde
are caught on the same coal-wind,
which carried my parents here.

That wind breaks my skin and curdles my blood into waves;
the old world makes my organs scream out their rage
from within their very own flesh-coloured cage.
I have been so angry at them, my peers refusing to go to their graves
with any kind of severity, dignity,
even as I rush towards that stone page
with all the glee of the suicidal.

And I have been angry since the Harrying of the North;
so angry that outrage has become normality,
peace has become apathy,
and relaxation is a means by which I refuse my thought.
I Love the World,
And Small-town England is the World,
and so I must hate.